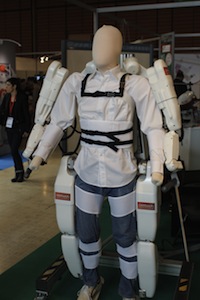 Developed by the interactive robotics unit of CEA LIST, based in Paris, EMY (Enhancing MobilitY) is a full-body exoskeleton designed to help quadriplegic people walk again.

The original technologies implemented in EMY were developed during the last 10 years by a team of 20 researchers and engineers from various research domains, including force-feedback teleoperation robots for nuclear facilities and haptic devices for virtual reality.

The current EMY architecture features four limbs, two legs with three degrees of freedom each, and two ABLE® anthropomorphic arm exoskeletons dotted with seven degrees of freedom. The robot will be ultimately controlled by a brain-computer interface (BCI) named WIMAGINE®. The interface between the BCI and the robot will be achieved by the physics-simulation framework XDE® developed by CEA LIST. The simulation layer allows EMY to be controlled at different levels of complexity, like joint motions or Cartesian programmed trajectories. Also, the XDE software will be applied next year to solve the stability problem. For virtual reality haptic applications, the XDE framework simulates movements, contacts, and frictions between virtual objects.

The particular design of EMY’s limbs, especially the arms (ABLE®), allows them to be used as haptic devices. The required high transparency is achieved using a patented, streamlined, mechanical transmission (screw-cable system) that minimizes friction and inertia. It also ensures that the current in the motor is an accurate image of the joint torque, so there is no need for a torque/force sensor. This is not only simple and reliable, but also energy-efficient and cost-effective.