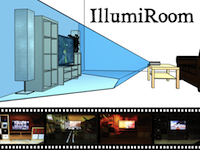 IllumiRoom is a proof-of-concept system that augments the area surrounding a television with projected visualizations to enhance traditional gaming experiences. It demonstrates how projected visualizations in the periphery can negate, include, or augment the existing physical environment and complement the content displayed on the television screen. The system can change the appearance of the room, induce apparent motion, extend the field of view, and enable entirely new physical gaming experiences.

The system consists of a projector and a depth sensor that covers a wide area surrounding a television screen. The television provides a traditional, high-resolution gaming experience, and the projector provides low-resolution information for the user’s peripheral vision. In contrast to previous work, IllumiRoom does not use flat white projection screens, but instead adapts the projection to the existing viewing environment. The system is entirely self-calibrating and is designed to work in any room.

The demonstration presents 11 example illusions. For instance, it can directly extend the game content into the room by displaying a wide field-of-view rendering of the game on the surrounding physical environment with radiometric compensation. Or it can augment the room to match the theme or mood of the game. For example, the system can can transform the room into a "cartoon world" by super-saturating the colors and adding black silhouette edges. It can also enable physical-virtual gaming experiences by using the 3D data of the room. For example, a grenade can roll out of the television, then bounce off the coffee table, and roll on the floor. All of these effects adapt to the color and geometry of any room.