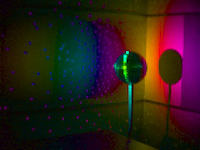 Transient imaging is a recent imaging modality in which short pulses of light are observed ''in flight'' as they propagate through a scene. Transient images are useful for understanding light propagation in complex environments, for analyzing light transport for research, and in many practical applications (for example, reconstruction of occluded geometry - ''looking around a corner'' - or measuring surface reflectance.

So far, advances in research and practical applications have been hindered by the high cost of the required instrumentation, as well as the fragility and difficulty of operating and calibrating devices such as femtosecond lasers and streak cameras. Light-in-Flight is a portable device that allows inexpensive and fast transient imaging using photonic mixer devices (PMDs). It achieves this by capturing a sequence of modulated images with a PMD sensor and inferring a transient image using numerical optimization and a mathematical model for local light interactions. The result: the cost of transient imaging is reduced by several orders of magnitude and the capture process is dramatically sped up and simplified.

In the future, not only researchers but virtually everybody will access to inexpensive, fast, and portable transient-image cameras with its many emerging applications. Light-in-Flight is a major step toward this goal. Conceptual and theoretical details are presented in the companion SIGGRAPH 2013 Technical Paper: Low-Budget Transient Imaging Using Photonic Mixer Devices.