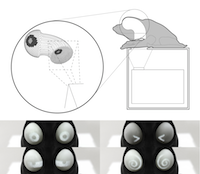 Designing animated eyes for interactive characters, robots, and toys is a challenge: they must be dynamic, fast, and highly expressive in order to represent a broad variety of character emotions and intentions. Creating eyes for fictional characters, (for example, in animated movies and cartoons) is particularly challenging, because their eye expressions are often non-realistic, highly exaggerated, and contain a much richer vocabulary of expressions than human characters. At the same time, the eye technology must be compact, fit into small characters bodies, require low power, produce no audible noise, and be robust and easily replaceable.

PAPILLON is a new technology that allows for design of expressive eyes for interactive characters based on printed-optics technology. It does not rely on the complex mechanical animatronic assemblies developed in previous work. Instead, PAPILLON eyes are designed as bundles of optical fibers that guide images projected on the receiving end of the bundle to the surfaces of the character eye. The eyes are 3D-printed slice-by-slice using transparent photopolymers separated by a translucent support material. Classic Fibonacci spirals are used for efficient packing of fibers on the eye surface and in the entire bundle. This allows for creation of arbitrary curved-display surfaces while minimizing visible artifacts, such as distortions on the edges of the eye. A Voronoi tessellation computes the shapes of optical elements on the eye surface, optimizing the distribution of light.